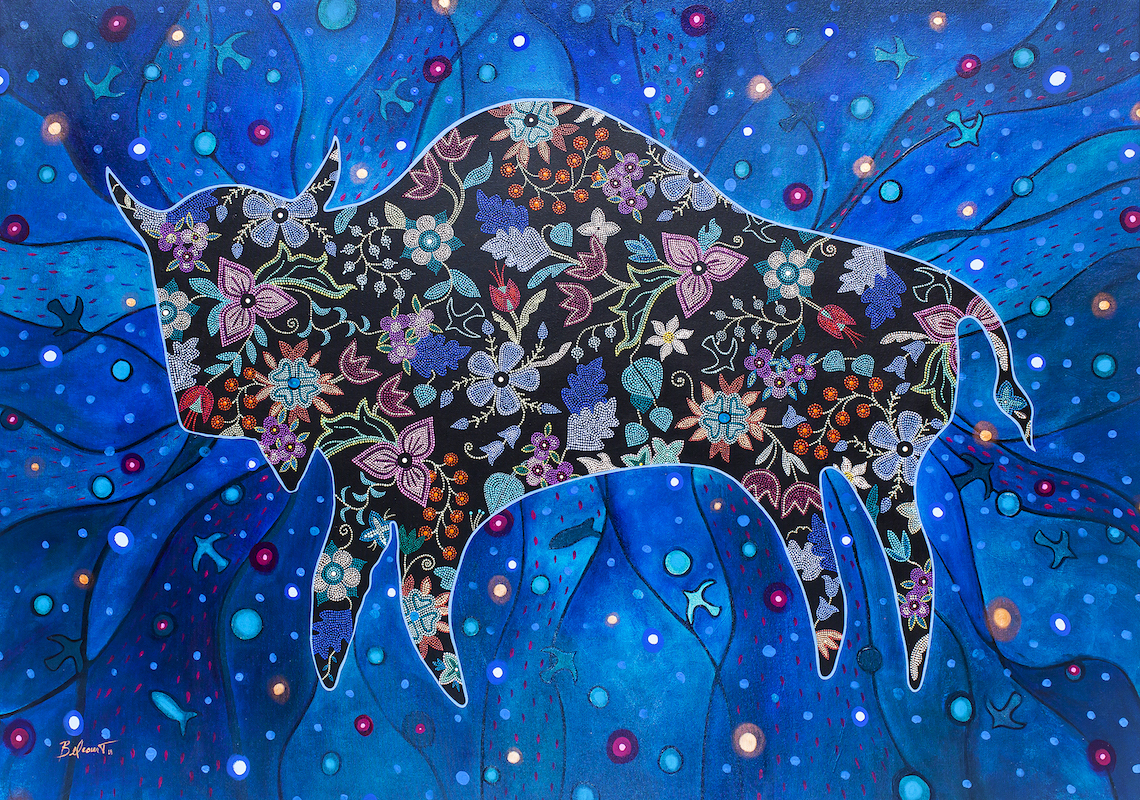 A Letter from the Artist

On Art, Walking With Our Sisters and the Problem with Reconciliation

Welcome to Five Dials 49. My name is Christi Belcourt. I’m honoured to be a part of the issue. I am Michif (Métis) artist. My ancestry originates from the Métis community of Manitou Sahkahigan (Lac Ste. Anne) in Alberta, Canada. I was raised in Ontario, and am currently based in Anishinaabeg territory on the North Shore of Lake Huron.

My people, the Michif people of Manitou Sakhigan, are Buffalo, Moose and Fish people, meaning we owe our existence to the earth and to these animals. We share with other Indigenous Nations an inheritance of a worldview connecting us to all things on the earth and in a lived state of gratitude towards all who sustain life. Before colonialism shattered our communities and dispossessed us from our lands, we relied on the buffalo for almost everything. We recognize the buffalo as a nation. They were ninety million strong before their own genocide occurred. They were annihilated because of the European’s hatred of us.

We have songs for the buffalo, as well as buffalo ceremonies. They hold the doorway in our sacred lodges. We tell creation stories of them. Our lives were lived on the land with buffalo and entirely attuned to the rhythms of that shared earth. We travelled freely, as they did. My ancestors survived, and I am alive today, because of them.

Turtle Island is the name of the lands that have become known as North America. For Indigenous Nations, they are filled with spiritual places and the blood and bones of our ancestors. The land is alive. It contains knowledge. The lands in Turtle Island were stolen from Indigenous Peoples. Full stop.

Canadians have convinced themselves that this is not so. For 150 years they have engaged in the active and systematic removal of Indigenous Peoples from their lands by force, coercion and death, while at the same time celebrating the myth of Terra Nullius, these vast empty territories that their ancestors ‘stumbled upon and heroically tamed.’

Right now, there are approximately 1.8 million Indigenous people in what is called Canada. They belong to 600 communities and speak 60 different languages. We represent about 1.4% of the total population.

From 1831 to 1996, over 150,000 Indigenous children were stolen from their parents and communities and placed within Indian Residential Schools. In total, Canada paid for and endorsed the operation of 150 residential schools run by the Catholic Church, the Church of England, the United Church and the Presbyterian Church.

Children as young as three or four were taken. Some remained in the schools until they were sixteen and suffered years of violent sexual, physical and emotional abuse and torture by those put in charge of the schools. Many families endured multiple generations of residential schooling. Each generation returned to their community traumatized, often unable to speak their own languages, and left to suffer the long-term torments of trauma. Many children never made it home. Parents were not informed of deaths. I can’t get into all of what happened at these schools, but there are many documented cases of actual torture and experimentation on Indigenous children, as well as cases where babies born to children who had been raped were murdered by the priests or nuns in charge of the schools.

It was pure horror.

No Indigenous community was left untouched. Every Indigenous Nation, and every village, no matter how remote, was targeted by the Canadian government, which used force to remove the children.

The goal of the British, and later the Canadians, has always been to eliminate and remove Indigenous Peoples from their lands to make way for resource extraction. This remains the goal today. Indigenous Nations went from having 100% of the land to only being in control of 0.02% of the land under Canadian law. Indigenous People did not voluntarily sign away 99.8% of their land.

For many Indigenous people, including myself, the word reconciliation rings hollow

In 2008, then Prime Minister Stephen Harper issued an apology on behalf of Canadians to Indigenous Peoples for Canada’s role in residential schools, and established the Truth and Reconciliation Commission, which was tasked to gather testimonies of Residential School Survivors and to share that truth and recommendations with Canada and Canadians.

Since 2008, the word ‘reconciliation’ has been used often in Canada, and some rare but sincere groups have come together to support the work of reconciliation between Indigenous and non-Indigenous peoples, primarily within educational institutions and government-funded events or the public sector. But for many Indigenous people, including myself, the word reconciliation rings hollow because these events – however well intentioned – have not been able to create the power shift necessary to address land dispossession and the systemic racism that remains at the core of the justice and child welfare systems. I believe true reconciliation can neither be comfortable nor convenient.

I believe reconciliation is not even possible without land returned and a complete and full correction of all that has resulted from our dispossession, including the restoration of our own Indigenous laws and full control over our lands.

We Indigenous people have endured 400 years of genocide, murder, dispossession, the theft of our lands, oppression, colonialism, and racism. Our communities suffer debilitating poverty. We also must endure the constant sneering expressions of superiority of a dominant society who has convinced itself, at every turn, of its own benevolence. All that was thrown at us was designed to dismantle our recognizable, sovereign, distinct nations. To weaken us. To divide us. Why? For our lands.

My work is not separate from the work of the hundreds and thousands of Indigenous Peoples and Nations endeavouring to bring health, healing and light to their communities. They often go unheralded. In Indigenous ways of thinking and knowing and being, the concept of walking softly on the earth is not a quaint thought. It is a way to live your life by refraining from harming the earth and instead speaking up for those who cannot speak for themselves.

The work you will see in this issue is varied. Some of my art is an attempt to transfer ‘beadwork’ to canvas, and in doing so add commentary and expression beyond the purely aesthetic.

Our ancestors left us with the artistic legacy of beadwork, quillwork and embroidery. I’m following a long line of artists by taking an art form that traditionally adorned useful or wearable items and adapting it by painting on canvas.

In my early work I began by placing a few ‘dots’ within my paintings to suggest beadwork. The process has now developed to where entire floral patterns are created in ‘dots’ by dipping the end of a paintbrush or knitting needle into the paint and pressing it onto canvas. The effect is thousands of raised dots per canvas that simulate beadwork.

In this issue I’ve also been asked to describe Walking With Our Sisters, a project that honours and commemorates the lives of missing and murdered Indigenous women. The installation features over 2000 pairs of handcrafted moccasin tops. It has toured to thirty communities in the last seven years.

According to the most conservative statistics, over 1,200 Indigenous women and girls in Canada have been reported missing or have been murdered in the last thirty years. Most experts believe the number is much higher. On average, an Indigenous girl or woman goes missing or is murdered every twelve days in Canada.

For those far away, let me describe the experience of the installation.

When you enter, a friendly face greets you and offers a smudge, a ceremonial way to cleanse yourself with smoke. You’re invited to take a pinch of tobacco and carry it through, infusing your prayers into the tobacco while you walk in the installation. At the end, the tobacco is put in a box that will later be placed onto a sacred fire.

We hold ceremony together, as ceremony is what’s required to properly acknowledge and honour the women who have gone missing

The room’s floor is entirely covered with red cloth. There is nothing on the walls. Traditional drum songs play softly. 2000 pairs of moccasin tops line the floor around the periphery of the room. Others are placed in the centre. Each pair is unique, intricately made with beads, embroidery or other materials. Their designs and colours vary. Each pair is unfinished. They are tops. They have not been sewn into moccasins. They represent the unfinished lives of the women being commemorated.

We hold ceremony together, as ceremony is what’s required to properly acknowledge and honour the women who have gone missing from our communities. We can’t do it by gawking. We can’t do it by seeing pictures, by staring from an outsiders’ perspective. We must do it by bringing their lives and the acknowledgement of the value of their lives within us. So we walk softly on the red carpet, in our stocking feet, heads bowed, as we admire and observe the workmanship and compassion placed within every stitch. Each pair represents one person, one human being, whose life was cut short by violence. Each pair represents a woman who is missed by family and loved ones. The injustice is evident. You might ask yourself: Why is this happening to Indigenous people?

As you leave, a friendly face will greet you again, asking if you would like to smudge once more to spiritually cleanse your mind and thoughts. It is through this act of kindness and gentleness you are instilled with a new understanding and, perhaps, a commitment to help stop the injustices and atrocities so that things will change for the coming generation. Perhaps it will help you understand that true reconciliation means confronting head on the issues that remain unsettled between us. It’s a chance to give back and restore what was stolen, even if it means unsettling an entire country to do so.

With love and light,

In unity with freedom fighters everywhere,